I had the pleasure of being let loose on the cover of brilliant children’s comic, The Phoenix this week, something I haven’t done for a while. I’ve been quite keen to focus on some of my main characters in Gary’s Garden, as I was afraid that it was all becoming a bit of a confused world, what with 10 billion different dudes popping in and out each week. So who better than Chompy, Caterpillar Supreme, to finally have his chance to shine and to shout out something stupid to all the world!

Chompy, how we love him. The mad fruitloop.

But what stupid thing could he be shouting? You’ve got to get these covers right, as you’re carrying the rest of your comic brethren on your shoulders and you want the comic to stand out on the crowded shelf…

It was to be the Easter issue I was told, so obviously, I thought, it also had to include a big colourful egg, with bold, bright colours. That went without saying.

Then, one evening, just as I was drifting off to sleep, I had a deranged vision of Chompy perched upon a big Easter Egg, declaring quite loudly, that he’d laid a massive egg! Bleary-eyed, I quickly wrote a note in my iphone before I forgot, otherwise, if I didn’t, this epiphany would’ve be lost for all time, along with all my other brilliant ideas that were lost to the ether.

The next morning,  I scribbled a rough version in my sketchbook. A big, bold design, with just the three elements of Chompy, egg and speechbubble, with rays of Easter sunshine emanating from behind (ok, that’s four elements. Whatever). 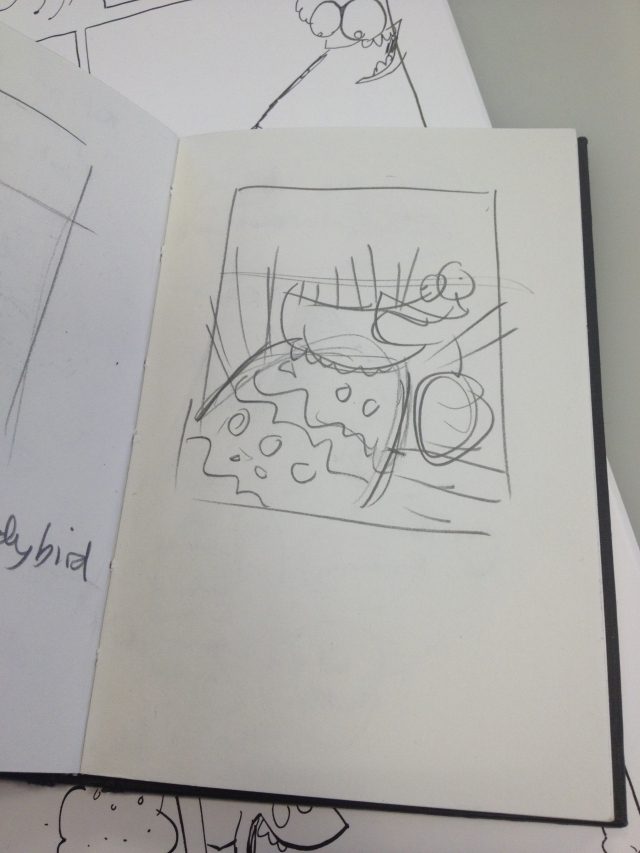 I originally had it a bit more centred and straight, but my ever helpful Fleece Station studio-mate, Sarah McIntyre, suggested a more angled approach. She was totally right. I bought her a can of Diet Coke as recompense.

I then scribbled this design out onto a big A3 sheet of paper (with a note to myself, at the top of the page, to slightly twist the dialogue to, “I’ve gone and laid an egg!”, to give it that nice colloquial edge.) I also added extra glee to Chompy’s already manic expression. 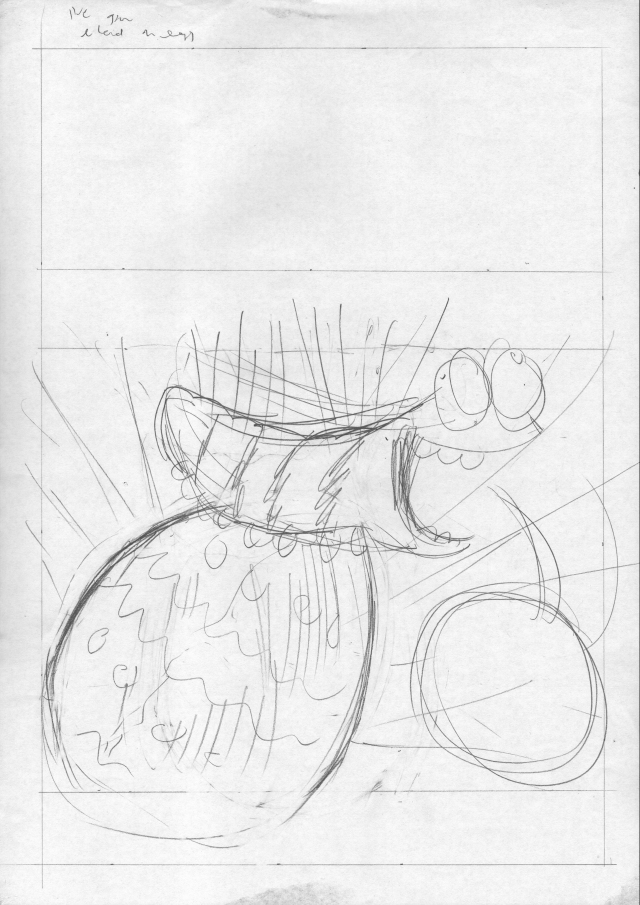 A masterpiece comes together.

Using a big charcoal pencil, I knocked out a tidier version; a version worthy (and legible) enough for the editor to peruse.

Wot? ANOTHER rough?! SUCH a perfectionist. Sigh.

Off it went via the medium of FTP and within the hour a much pleased editor, Will Fickling, gave the big thumbs up, cheerfully describing how Paul the art editor had let out some “laughing snorts” as soon as he caught a glimpse. I was onto a winner! He also hoped that the story to accompany it would be just as nutty. I too hoped this! (I hadn’t even written it yet. Eep!)

I inked it up with a Faber Castell brush pen. Not my usual weapon of choice (that would be a Deleter G pen nib), but I wanted a big thick line so it would stand out.

All I had to do now was colour it in! Woohoo! 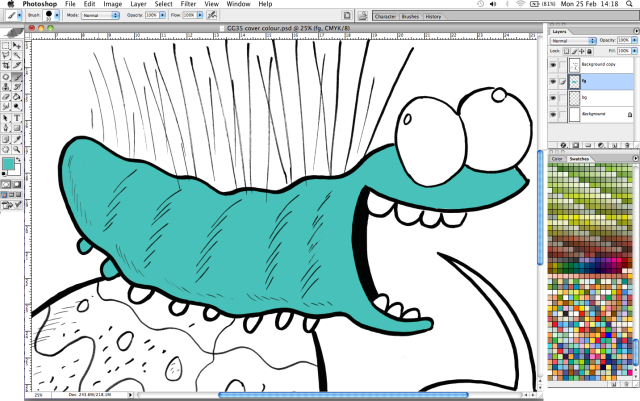 So many billion of colours to choose from.

Hm. But figuring out the big bright colours of the egg, so that they would sit comfortably with Chompy and the rays of sunshine wasn’t going to be an easy task… 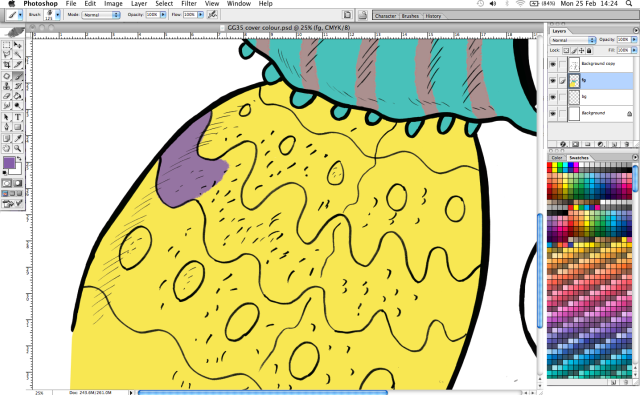 Nope. Maybe red and yellow with blue spots, then? 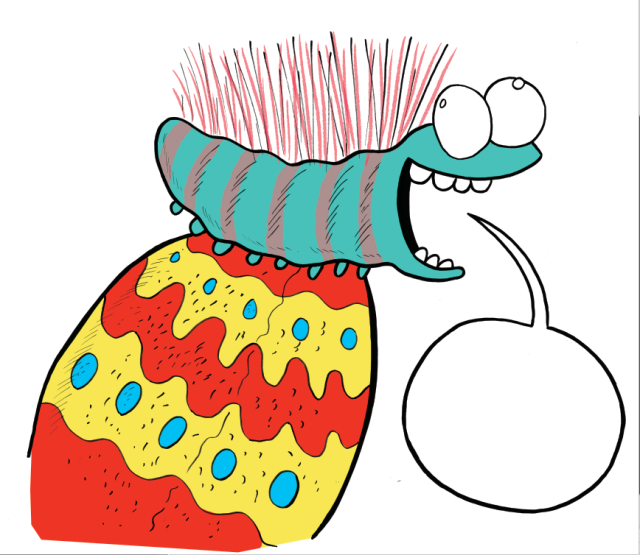 Aaaiieee! Too much yellow! Bring back the purple! And change the red to pink!

Ah. That’s betterer. You can’t go wrong with purple and pink, I say.

Now, at this point, I zone into what I call “Method Illustration”, and I summon up all my deep memories of holding and eating a big lovely Easter Egg. The textures, the shinyness!  (I mean, obviously I could’ve just gone to the shops and bought one and studied it, like a proper artist. But I was on a diet and I would’ve scoffed it, then I would’ve been miserable and depressed at my deep, human failings, and nobody wants that). 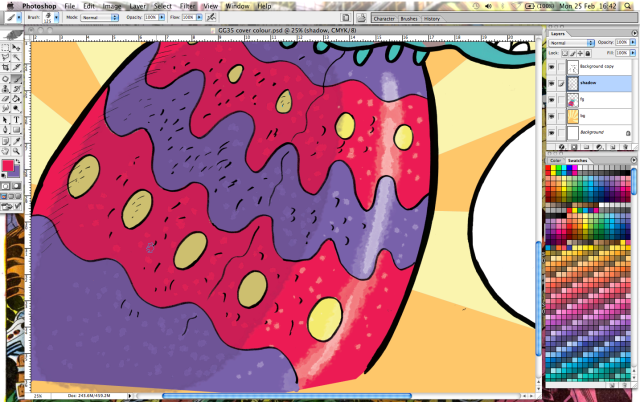 I can taste the chocolate from here…

Yeah! That’s the stuff! Just like a proper Easter Egg!

And here’s my final artwork all shaded, texturised and lettered:

It’s so beautiful, I think I might cry. Sob.

Now, all I had to do was think of a stupid story to go with it, no pressure…

Here’s a jolly picture of the comic hot off the press a few weeks later from the Phoenix twitter account. Don’t it look grand?

Cor! Thousands of ’em ready to take over the world!

So, if you want to see what nonsense I came up with inside (it totally involves a scene with Chompy wearing a bikini), plus all the other brilliant strips that feature every week, then get yourself a subscription, or check out one of many book stores dotted around the country that stock it!

Hello. I am the world famous cartoonist Gary Northfield. I am mainly known for my brilliant zebra drawings, but I also draw caterpillars and sheep.
View all posts by Gary Northfield →
This entry was posted in Chompy, Easter, Garden dudes, Sarah McIntyre, Sketches, The Phoenix. Bookmark the permalink.